New Delhi: World will witness its first lunar eclipse on Sunday and Monday (i.e May 15 and 16), process of the eclipse will begin at 10.27 pm (Eastern Standard Time) on Sunday, which according to Indian Standard Time will be 7.57 am on Monday.

A lunar eclipse occurs when the Moon moves into the Earth’s shadow. This happens only when the Sun, Earth, and Moon are exactly or very closely aligned with Earth between the other two, which can happen only on the night of a full moon when the moon is near either lunar node. The type and length of a lunar eclipse depend on the Moon’s proximity to the lunar node. Eclipse blocks the sunlight to reach the earth. This light appears reddish for the same reason that a sunset or sunrise does: the Rayleigh scattering of blue light. A lunar eclipse can be viewed from anywhere or on any side of the earth.

A blood moon is also known as Chandra Grahan. Darkening the moon, until it turns from silver-grey to orange or red. This year, the Lunar Eclipse will be grand because Moon will be near its perigee, or closest point to Earth, making it seem larger in the sky. On eclipse night, the Moon will seem 12 percent larger. 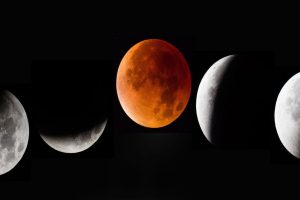 How to watch: If your country is not witnessing Lunar Eclipe, still you can watch it on Youtube or by visiting NASA’S social media handles. 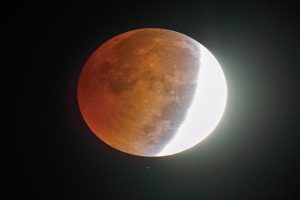